A man sells chickens in a market in Abrud, central Romania March 24, 2014 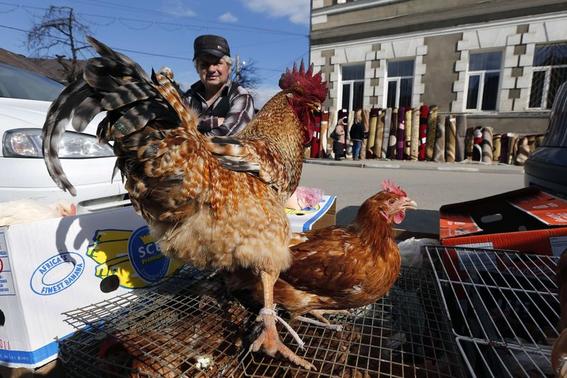 (Reuters) – Adriana Berindei ran out of patience with her small Romanian hometown of Abrud when she tried and failed for the 16th time to get tenure at the local school where she taught.

So she hung up her two undergraduate degrees and two masters in political science and modern history and moved to Britain to work first as a childminder and then a cleaner.

Though she lives with her boyfriend in a crowded house with other migrants and was hesitant to tell her parents she worked as a cleaner, Berindei says life in London has given her peace of mind. She plans to start a small business and dreams of buying a house with her partner.

"I was cleaning a sink one day and I thought, if only my mother could see me now," said Berindei, a petite 39-year-old who took to London right away. "Sixteen years of torment was enough for me."

Immigration has become a hot topic in Europe as the continent recovers slowly from years of economic hardship.