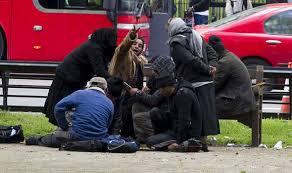 Romanians come second on the list of foreign nationals arrested by police for serious crimes, police have revealed.

Nearly 28,000 have been held for serious offences in London over the past five years, including violence and sex crimes.

That is the equivalent of 15 Romanians being held by the police every day. There are only estimated to be 68,000 living in the UK.

It puts Romania second only to Poland in the list of countries with the most citizens arrested in London – but there are around half a million Poles in Britain.

Pickpocket: Romulous Rostas, 18, and his family preyed on train passengers as they slept. They built five mansions in Romania, right, and spent proceeds on designer clothing and luxury cars