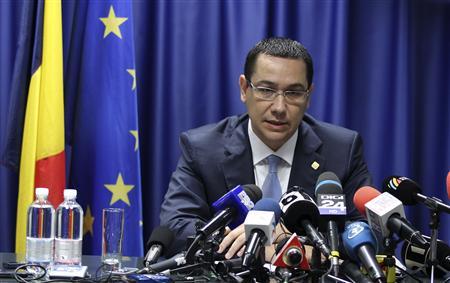 Reuters) – A panel of Romanian academics concluded on Friday that Prime Minister Victor Ponta plagiarised a large part of his doctoral thesis, but Ponta said the finding was politically motivated and he would not resign.

Plagiarism charges have forced several European politicians to quit: Hungary’s president, a German defence minister who was tipped as a possible successor to Chancellor Angela Merkel, and the man Ponta nominated as education minister.

"I found nothing but plagiarism of a copy-paste type," Marius Andruh, president of the CNATDCU’s general council, told reporters. "The council wanted to remove the title of doctor."

Earlier in the day, Ponta’s leftist government – in power since early May – said the panel must be expanded and new members brought in, which would mean its judgment was invalid.

Ponta also said the conclusion was political and illegal.

"I will establish to the Education Ministry’s ethics commission that I respected all the rules. I am not giving up the struggle which I started because of these attacks. No talk of resignation," Ponta told reporters as he left an EU meeting in Brussels.

A member of the panel denied there was anything political about its decision.

"Members of this committee do not do politics and are not paid for their activities," CNATDCU member Dragos Ciuparu told reporters.

Daily Mail : Pictured, the colourful army of Romanian gypsy ‘dancing bears’ who take to the streets at New Year to ward off...

The future steps of Scala – What to expect from upcoming...